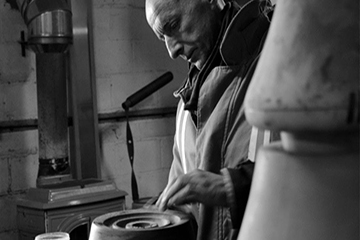 Grenville Davey, British artist born in 1961 in Launceston, he first studied art in Exeter and later continued his studies at Goldsmiths College in London, where he earned a degree in Fine Arts. Since 1987 he is actively present on the London art scene, where he is well known for sculpture and craftsmanship, characterized by preference for rounded forms and circulars.

Wentworth, Cragg, Woodrow and Deacon were his models, harbingers of a new era of interest in industrial materials. Davey does not start from pre-packaged items, he prefers to study the industrial manufacturing processes and he creates himself his sculptures with extremely simple and linear shapes, often reducible to basic geometric shapes. What matters to Davey is not to know the operation of the object, but its appearance, its physicality, which carries only a veiled suggestion concerning the possible use in actual experience. Due to the materials, the finishes and the enlargements he use, his works often look like elegant and refined prototypes waiting for a serial production.

He won the Turner Prize in 1992, while more recently he has undertaken several residencies for artists at the Isaac Newton Institute for Mathematical Sciences in Cambridge and the Centre for Research in String Theory, Queen Mary University of London.