Born in 1967 in Hamilton, Scotland, Martin Boyce now lives and works in Glasgow. He graduated in environmental art in 1990 at the Glasgow School of Art, where he followed an MFA in 1997. Boyce is a neo minimalist artist that creates sculptures and installations that explore poetically the connections between art, architecture, design and nature.

In particular, he is concerned with the psychological experience of a space, which is inspired by when he has to create new works, and the material manifestations of time passing. He takes the forms of design and everyday objects such as internal and external environments, to then decompose, distort and abstract them in order to create balanced architectural compositions which are not immediately recognizable, even if we perceive them as a family.

The artist has collected a huge photographic archive which explain his research and its stylistic manipulations.

In particular, from 1997 his sculptures refer directly to a selection of specific design objects, including the Eames Storage Units, the number of Jacobsen chairs, the concrete trees of the garden Joel and Jan Martel, the table of the student’s home Prouvé.

Exhibitions: Martin Boyce: When Now is Night, New York, 2016; Martin Boyce: In Praise of Shadows, Johnen Galerie, Berlin, 2012; Turner Prize Baltic Centre for Contemporary Art Gateshead, UK, 2012;Martin Boyce and Ugo Rondinone: We Burn, We Shiver at SculptureCenter New York, 2008;  This Place is Close and Unfolded at Westfalischer Kunstverein in Munster,Germany, 2008; Out of This Sun, Into This Shadow at Ikon Gallery Birmingham, UK, 2008; A Lost Cat and Alleyways, Back Gardens, Pools and Parkways at Centre d’Art Contemporain Genève, 2007; For 1959 Capital Avenue, Museum für Moderne Kunst, Frankfurt, 2002; and Our Love is Like the Flowers, the Rain, the Sea and the Hours at Tramway, Glasgow, 2002.

In 2011 he won the Turner Prize, and in 2009 Boyce had represented Scotland at the 53th Venice Biennale with a personal pavilion entitled No Reflection. 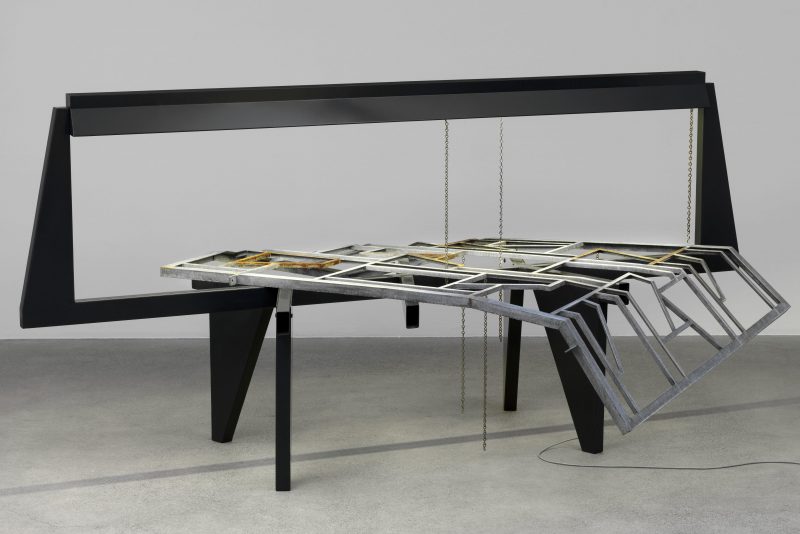