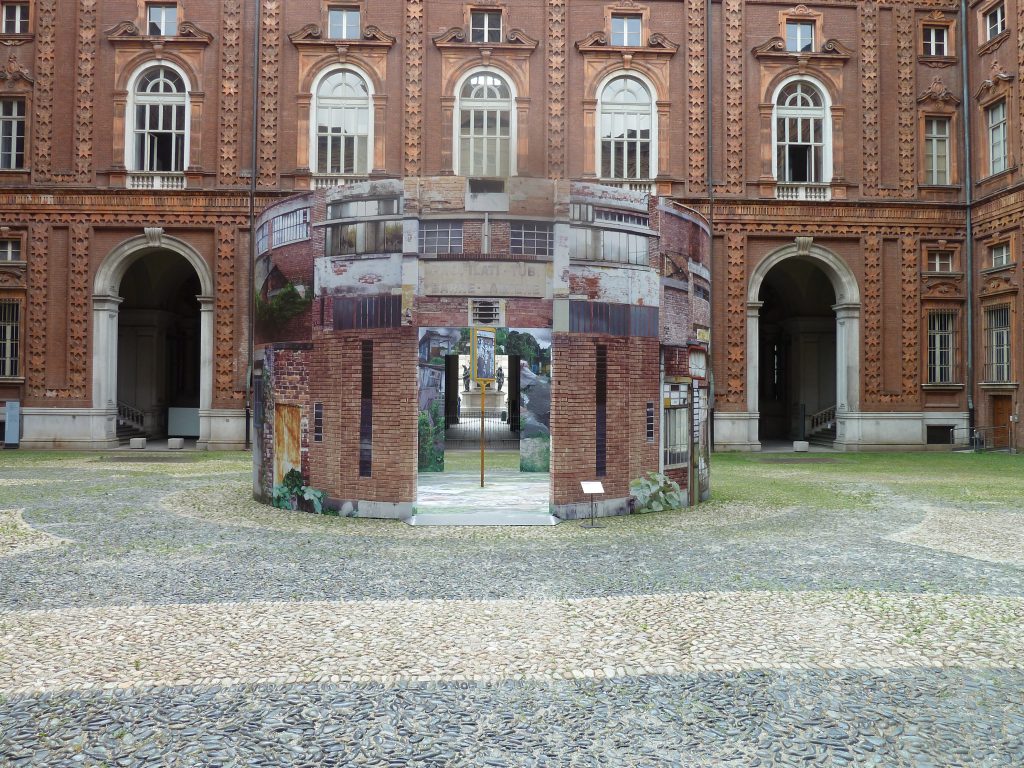 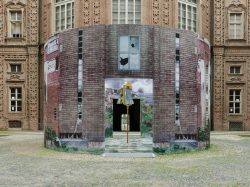 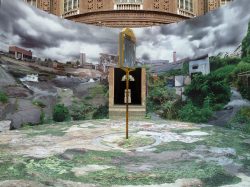 Waiting for the last bus is a installation art project exhibited during Summer 2016 at the Arte alle Corti II edition Turin.

It is an art installation that interprets the relationship between the exhibition space – central courtyard of Palazzo Carignano – and the urban context that surrounds it – an anonymous suburb, seen as an alternative territory and for reflection. The impression that emerges is that the center of the city welcome and almost protect these areas usually less considered, in a symbolic gesture of awareness of two very different worlds.

The bus stop sign bring to mind the idea of suspended time, the same time that you can feel inside of Palazzo Carignano’s courtyard, two different waiting placed in dialogue.

The artwork is made by photographic images printed on PVC, on coils which measure 500 cm to infinity, applied on iron and wood structure for the walls, while the floor is made of plastic.

Excerpts from the technical interview to Botto and Bruno:

“There are artworks focused on specific areas, usually they are suggestions of years of work. In this case the idea comes from the architecture of the Palazzo Carignano, its courtly bricks, so the connection with industrial brick came immediately to our mind. For many years we took pictures of abandoned factories – in Turin and Europe in general – so we imagined to bring this work from the abandoned suburb to the centre, in a hushed place, wrapped in an atmosphere of other times, extinct as well as the golden years of industry”.

“We studied the organic evolution of the Palazzo Carignano, in order to make the structure follow its movement and the floor details, in particular the two circles drawn which works as perimeter to our structure. To keep the possibility of crossing the courtyard was very important for us, so people could watch and cross the installation, passing by the yard in a suburban landscape, and then again in the city centre. It’s another level of dialogue between the artwork and the context in which it has been set, emphasizing the centre–suburb relationship. “

“Each artwork is linked to the previous one, we bring forward an idea that change with the time but that encloses our poetic. We never realized projects far away from the starting point and from the attention to the outlying places, there rather have been developments using different techniques and materials. For example, there were musical experiments and we are inspired by cinema and theatre, we took ideas from childhood and adolescence world… it is a binary that we keep following, which makes us not derail.”

“Slowness is really important In our work because during the creation there is a real process, a change, a tiring evolution, physical as well due to the attention to details that it requires, which affected our sight too. It reminds me about restorer’s job – context where we come from – as there’s a similar meticulousness needed, but for us it is crucial to create something in a specific way and respecting the time it will take, in a world where images are absorbed and digested too quickly.”

“Our photographic archive – photos already printed and their negative – is organized on themes, for example there is a section for skies, lands, buildings, clouds, figures etc, while there is nothing divided by age. For sure our memory plays a key role in this context, but usually we move to areas.

“Technology that we used to deal with changed a lot now. In the past the quality of photo paper, ink and printing was higher, while today we have more freedom in terms of printing at large sizes. If our old artworks would need to be printed again today, we should first resume them all, because now they have a much lower definition. Analogic photography is now a rarity in Italy, and it’s difficult to find good quality materials and there are less distributors because they aim on the plotter size and ecological products, and even if it’s true that the definition is higher, but then the colours changed and they all look the same . “