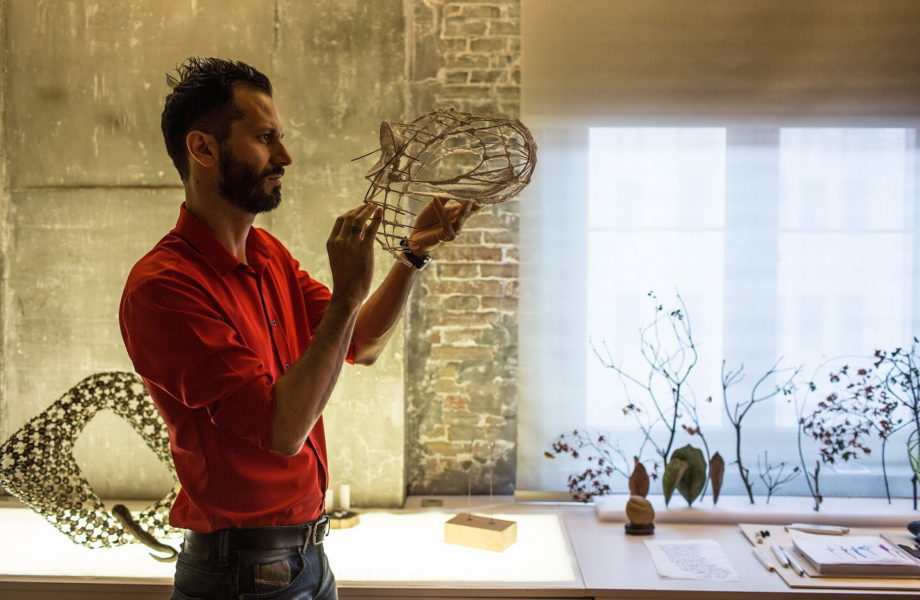 After studying architecture in Florence, in 2005 he moved to London and in 2006 he inaugurated his artistic production path with participation in the XII International Sculpture Biennial of Carrara. In 2007 he graduated in Sculpture from the Academy of Fine Arts of Carrara.

Sandro uses different sculptural techniques to create ever new polymorphic installations, pursuing a dynamism that he proposes, expanding and contracting it to infinity, the multicellular structure of the tissues of living organisms, the perpetuation of the cycle of life and death. His sculptures are made of intertwined modules, dense reticulated of hexagonal modular elements of lime, birch and walnut wood connected with leather or metal joints, which repeating themselves create full and empty spaces in perfect balance, giving life to structures that interact with the surrounding environment or with the shapes and architectures nearby, without distorting them but always adding a new form, a new reading.

A research that develops in geometries that live on transparency and air, structures of wood, iron or leather, which add the surrounding shapes to their shape, which are colored by the colors that surround them. “Sandro’s works are not just beauty, they are a search for elevation to the sublime, recovery of a primordial condition, reflection on contemporaneity, on the role of humanity and nature and on human conscience with respect to others.”

Among the numerous personal exhibitions and international reviews in which Sandro has participated, the following should be noted:

In 2011 he entered the FENDI collection with the commission of a performance Fatto a Mano for the Future. He collaborates with the artist Giuliano Tomaino, with whom he presents a four-handed work for the Galata Museo del Mare in Genoa and for the CAMEC – museum of contemporary art in La Spezia. In 2012 he entered the C.A.V. Visual Arts Center in Pietrasanta-Italy with a large installation. In 2013 the personal Continente at the Margini Gallery in Massa earned him a commission for a large installation at the Civic Museum of Marble in Carrara. In 2014 he is in Shanghai, where he is active for six months creating a work for the SWATCH collection, a group for which he still works today. In China, his work is exhibited at How art Museum in Wenzhou and at the ArtThat Koca Art Space gallery in Shanghai. The wooden slat structures designed during the London recidencies in Bloomsbury and Tavistock Square Garden in 2005, those created for the XII International Sculpture Biennial of Carrara in 2006, the aerial suspension of a sphere at the Galata. Museum of the Sea in Genoa in 2009, the large dome placed above the canopy of trees, Fragile Relation, in 2012, currently in the permanent collection of the C.A.V. Centro Arti Visive di Pietrasanta (Lu) and finally, the scenography of wooden supports, composed of expanding square shapes, created in the same year at Palazzo Panichi di Pietrasanta for the Rexistenz 2D 3D festival. Tridimensions Today, in collaboration with the Visual Arts Center Foundation; the Fragile community network that covered vast portions of the surface of the Lima river, in Bagni di Lucca, installed for the 2013 Art Festival, or the one placed, again in 2013, in the gulf at the back of the castle of Lerici (Sp), What came from the sea, like an island surmounted by a central projection similar to a rocky concretion. In the same year, the Civic Museum of Marble in Carrara (Ms) commissioned him to install Fragile Encounter.