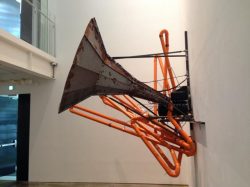 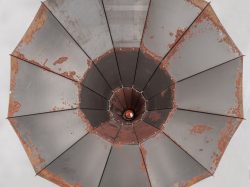 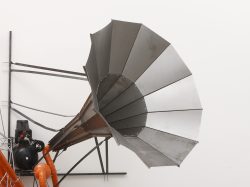 The metallic bell is part of a more complex installation, called “25L“, which includes a series of 7 cm diameter PVC pipe modules, which engages in the narrowest part of the bell by screws. The artwork is divided into three layers each consisting of twelve segments, for a total of 36 blades.
The segments are joined together by mechanical constraints compounds by numerous bolts and washers. The tubes are assembled together in order to create a labyrinthine structure obtained by the union of linear modules and corner joints hot welded.

The choice of PVC tubes typically used in construction is motivated by the particular interaction between the PVC and the sound, which is such deformed and amortized to create an interesting cacophony that completely engage the viewer.

What makes possible the installation sound component is a compressor located behind the artwork, near the bell-graft tube.

Excerpts from the technical interview with Alberto Tadiello:

“25L is in a period that I consider as past, that saw me busy for about four years in a research between the sculptural and acoustic realization. The artwork was produced in 2010 and since then has brought more ideas, ideas for new projects, but this kind of production I would consider it finished four years ago. “

“It was a huge task to achieve this work in a microscopic study of 4 by 4 meters, on this occasion I learned what it means to design the installation, the transport, the packaging for such big size works, so it was an important work also for the basics it gave me at a production level.“

“The fact of being able to engage the work, rather than bolt, screw, seal it, all skills that I developed over the years, grew in me another interest, the desire to produce something starting from the components that at beginning had a completely different story, other uses.“

“By working with materials that I know I am aware of their development over the time. In this case – of 25L –  I knew that the bell would be rusty but until the moment when this degradation does not  interfere heavily from an aesthetic, sculptural or plastic point of view – for example loss of pieces – or from a sound point of view, it is a risk that I consciously decide to take with the artwork.”

The interview was carried out within the project  Interview with art, by Benedetta Bodo Albaretto in collaboration with the Center of Conservation and Restoration of Venaria Reale and the Fondazione Sandretto Re Rebaudengo, Turin.