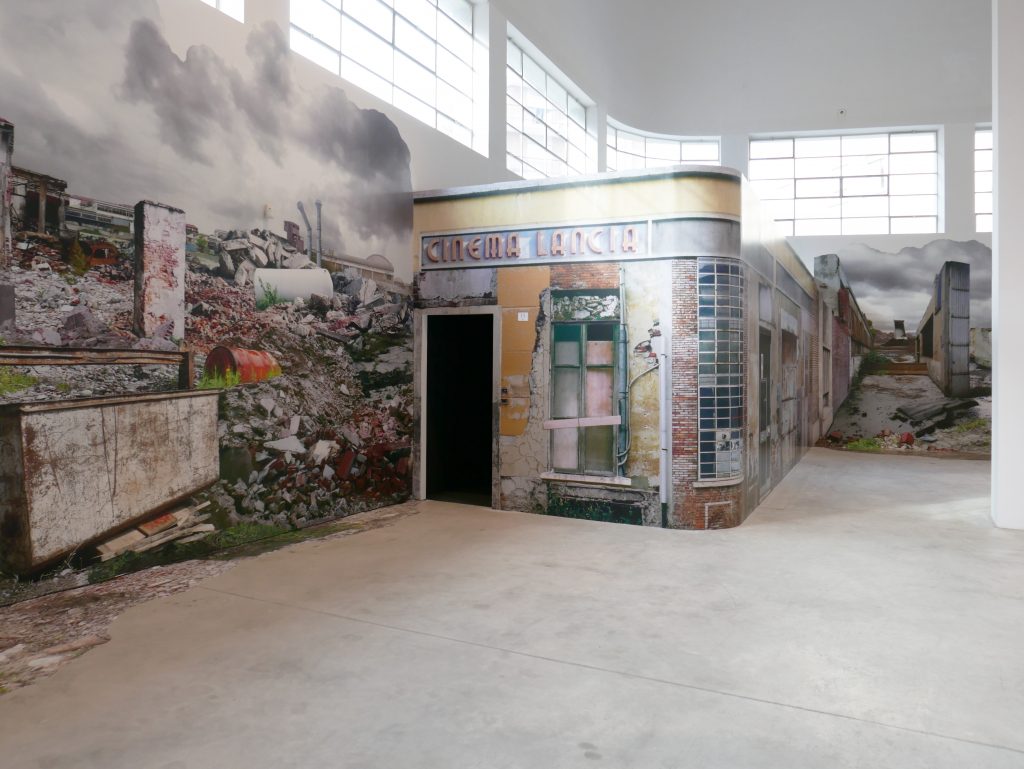 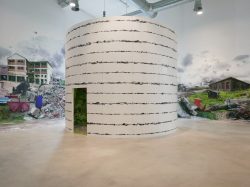 Society, you’re a crazy breed is a project meant to be as a single large installation in a big exhibition space, the Merz Foundation of Turin, a cultural centre who invited the artists to relate to their story, comparing their artistic research with its industrial and decommissioned past.

This installation is born from the study and assembly of hundreds pictures taken by Botto and Bruno over the past years, put together in a report focused on an urban landscape, an area of town that has changed in recent years, an important place in the past and that doesn’t exist anymore. The Foundation has become the fulcrum around which the memories rotate and where it is possible to imagine an alternative future. Botto and Bruno wanted to give life to one of the tanks that originally occupied the space of the Foundation, investing it as the role of memory and imagination. The structure is perceived as an abandoned place with an almost alien nature, genetically modified, which takes back its spaces, as a poetic and violent nature. Next to the tank there is a local cinema, it is like a symbol that unites the childhood memories of both artists,  it is a place invented, where during the exhibition were screened excerpts of films that have marked the artistic journey of Botto and Bruno.

In one of the Foundation’s room there were set up six caskets with all the materials about the project and the installation, an exceptional event, the first opportunity to expose a very private part of Botto and Bruno artworks.

This artwork is made by printing photographic images on PVC, on coils which measure 500 cm to infinity, applied on an iron and wood structure for walls, while the floor has been commissioned by the Foundation, in PVC as well.

Excerpts from the technical interview to Botto and Bruno:

“The Foundation has always reminded me about my childhood, I used to walk there when I was a child, and the idea of going back there as an adult fascinated me. First we tried to understand the neighborhood, what has become over the years, because I remembered it like a working class neighborhood while today is quite anonymous, it has lost its identity. The same principle of seeking the traces we have applied it to the Foundation, the first thing that struck us were the traces, the circles that you see at the entrance, the imprint of the tanks cooling which were formerly found in these rooms. We thought “why not bring back one of these tanks?” by starting a research project on the state of the city, mainly European. “

“For such huge works we got to use about 800-900 images. We start from small details, even a blade of grass, a piece of architecture or sky, which are cut and assembled to build a new heaven, a new space. We know what we talk about when we start this process, but we do not know what kind of image will come at the end, each detail calls another one.“

“This installation took almost eight months to be completed and then two weeks just for the installation of the facilities, 10 hours a day in which we were helped by two other people to spread the glue. And we didn’t make the floor.”

“We are a bit more worried about outside installations, because we have to relate to multiple items, such as climate, security and the public. Not everyone has respect for the artworks, and when these are outside a museum context, the risk is bigger.”

“We are a bit more worried about outside installations, because we have to relate to multiple items, such as climate, security and the public. Not everyone has respect for the artworks, and when these are outside a museum context, the risk is bigger. “